For some strange reason, a couple of people have asked me what I look like, so here's a really awful picture of myself looking rather red in the face, adjusting my own Mellotron, M400 #1145 at a ReGenesis gig, early 2001. All captions welcome; best yet: "Andy T tries to evict the family of hobbits living in his Mellotron" (thank you for that, Mark Rae...)

and, "So THAT'S what happened to Mike Pinder"

"No, it definitely doesn't say 'this program has performed an illegal operation and will be shut down'!!"

and Devan Gladden hit upon: 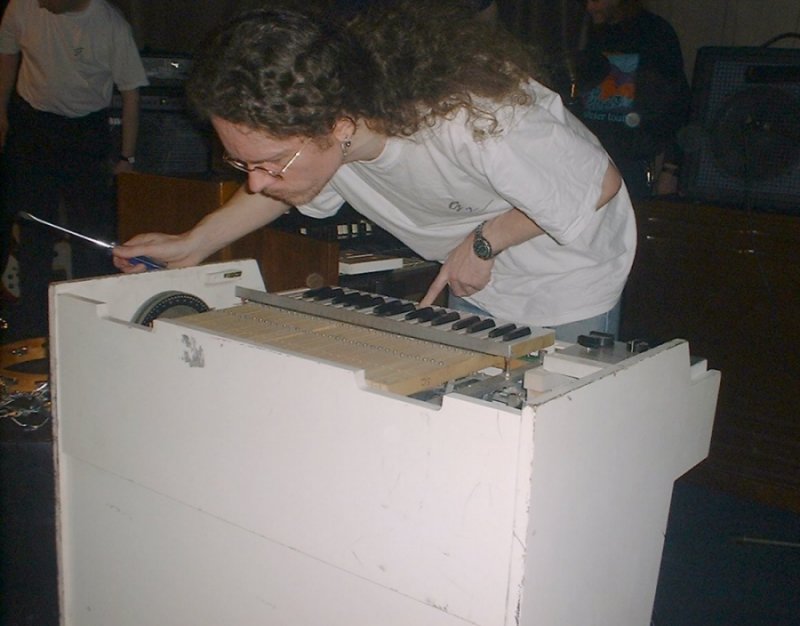 Actually, while I'm about it, here's a pointless list of what my Mellotron's been up to in the (ohmigod) 20 years I've owned it:

Nothing, 'cos it was in bits, apart from a vague attempt to record it onto a 4-track at home. The motor board was so fucked that I had to tune it to play three-note chords; any more or less notes put it out of tune. I'd intended to use it on my own band, Hejira's demo in Spring 1987, but its sorry condition (and weight) put the kibosh on that one.

Summer 1996: unknown artist, two days in a small studio in Hampstead, north west London. Flutes used on a dance remake of Buffalo Springfield's 'For What it's Worth'. Results unreleased to my knowledge.

Spring 1998: Nervous, several months (!) in their own studio in Spitalfields Market, east central London. Bill "William D." Drake, ex-Cardiacs was the keyboard player and my contact. Results crept out eventually, though possibly only as a promo.

Autumn 2000: Guapo, one or two days, Zed One Studios, Camden, north London. Played by Matt Thompson, strings on 'Mountain of the Five Elements'. Released on Great Sage, Equal of Heaven, 2001.

April 2001: Siberia (the band I was playing in at the time), one day, the bassist's studio, Worthing, West Sussex. Mostly strings, with a bit of choir, played by myself. Results (sadly) unreleased.

February 2003: Litmus, my front room, bassist's digital 8-track, played by myself, all strings. Cover of Hawkwind's 'Paradox', released on Daze of the Underground, 2003.

February/March 2004: Litmus, my front room, three days, bassist's digital 8-track, played by myself, strings/choir/flutes/cello. Several songs for our first album, You Are Here.

June 2006: Litmus, my spare room, several days spread over the month, played by myself, strings/flutes/choir. Several more songs for Planetfall.

2007-8: Litmus, Martin the bassist's upstairs studio, long-term, while I do work on my flat. Used on the third Litmus album, Aurora and a Gong cover for a tribute album, loads of sounds, including strings, 3 cellos and percussion.

late March 2008: Sanctuary Rig, a studio in Harlow for a day for their forthcoming debut album, Khnosti.

? 2008: (?), two separate occasions in a Walthamstow studio, apparently for some library music (!)

November 2009: Cathedral, The Chapel, Lincolnshire, a week, millions of sounds for The Guessing Game.

November 2010: Litmus, one day at my flat, material for their fourth album.

December 2010: Martin from Litmus, two days at my flat, material for his side-project.

February 2011: Matt Thompson, one day at my flat, material for a side-project.

March 2011: Matt Thompson, one day at my flat, material for a side-project.

March 2011: Matt Thompson, one day at Zed One Studios, material for a side-project.

25th August, 2003: Änglagård, Spirit of 66, Verviers, Belgium, played by Thomas Johnson, although my tapes were played by Anna Holmgren in their own machine. Not officially recorded.

22nd/23rd/24th January, 2005: Litmus, supporting Julian Cope on his UK tour, Wolverhampton Wulfrun Hall/Sheffield Leadmill/Liverpool Carling Academy. Mostly strings, with a splash of choir played by my good self, marking my auspicious debut playing my own 'Tron live. Yippee! Oh, and it was taken to Exeter the previous week for our Ozric Tentacles support, but not used due to stage size.

7th October, 2005: Litmus, Walthamstow Standard, London, me, mostly strings with some flutes and a bit of choir.

2nd May, 2009: Mellofest 2, Kilburn Luminaire, London, strings and flutes, played by my good self.